The future of forest conservation

History is being made in the Democratic Republic of Congo. Local communities have participated in redrawing the borders of a nature reserve. They now seek effective participation in the management of the reserve. If successful, this experience could become a model for future conservation projects.

In a hilly area in South Kivu in the eastern part of the Democratic Republic of Congo (DRC), lies the Itombwe forest. It’s an area with unique biodiversity; full of rare trees, tropical birds and some of the last gorillas on the planet. It’s also rich in commercially valuable natural resources such as coltan - essential for making mobile phones -, gold, and valuable tree species.

The international and national appetite for these resources threatens this forest, and thereby also the existence of the people living in it.

The traditional approach to conservation in the DRC, as in many countries in Africa, has been to establish national parks where human activities were strongly restricted, if not forbidden altogether. Entire forest communities have been displaced from their traditional territories and forced to resettle outside of the forest. This has had dramatic consequences for expelled communities in term of loss livelihood and identity. Conservation objectives have often also been hard to reach, without the support of the local communities.

The challenge is to protect the forest in line with the rights and interests of people living in forested areas.

In Itombwe, local communities and environmental organizations are developing solutions which will hopefully be central in saving DRCs unique rainforest for the future.

What Rainforest Foundation Norway (RFN) has done in Itombwe

The first national parks in the DRC were established in the 1920s, when the country was still under Belgian colonial rule. Their conservation model excluded most forms of human activities, and has largely continued even after independence: As recently as the 1970s and 80s, over 6,000 indigenous people were forcefully and without compensation expelled from their traditional land when the Kahuzi Biéga National Park was established.

At the same time, the people living in this area have been hit hard by the civil war that begun in the mid-1990s. The presence of armed groups in the eastern part of the country, bordering Rwanda, has caused severe security threats and forced hundred thousands of people to flee, also in the Itombwe range (see map).

The forest dependent people have therefore been under double pressure, prevented from entering the forests that were their only livelihood, both because of conservation and conflict. For the local communities, this has meant displacement from their home, uprooting of families, being chased away from their traditional way of life and being pushed into an un-known future.

For the indigenous pygmy people, whose culture, identity and knowledge are rooted in the forest, displacement means a dramatic loss of identity, which affects the very existence of their people.

Despite being denied access to the forest, the indigenous pygmy peoples of the Itombwe, belonging to the group named Bambuti, have remained attached to the area. It has been their homelandfor millennia. They have maintained a nomadic, or semi-nomadic, way of life that differs from sedentary agriculturalist groups.

– The Bambuti-culture is the forest. It is a long tradition that belongs to the forest, says Irangi, a bambuti man in his thirties who lives right at the edge of the Itombwe Reserve.

– I was born and raised in this forest. I got married and had children in this forest. I only left for a few years to study in the city, but I came back and now I work as a teacher here. This land belongs to our community because our whole life is here: we find our food here, our medicines, everything we need. We, the Bambuti, cannot exist outside the forest, our nature is to live here, he says.

In 2006, the DRC government decided to create a protected area in the Itombwe forest. The initial regulation – or decree – arbitrarily defined an area of 15,000 square kilometers where no human activity would be permitted anymore. People living in the Itombwe area feared for their future as the forest plays a crucial role in their subsistence and cultural activities. The establishment of the natural reserve in its initial form would have been dramatic.

– When we learned that the reserve had been created we were angry, says Marie, a bambuti woman. - When you learn that the place where you get food, medicines, and where your ancestors are, is being taken away from you, how can you be happy about it? We were afraid to see it stolen from us. Then we thought: we won’t let this happen.

Local communities started to protest. They raised concerns about their rights and their livelihood, and they demanded to be heard when they opposed the project. Indigenous peoples-organizations became particularly vocal, generating international attention, with the cooperation of NGOs, including Rainforest Foundation Norway.

Africapacity, a local civil society organization supporting forest peoples, helped the affected communities share information and organize, in order to get their voices heard. Protests quickly reached a high intensity level, and the communities were prepared to keep conservationists out.

Though this was not the first time a protected area was being established without the consent of concerned communities in the DRC, the protests were sufficiently strong to make it impossible for the authorities to ignore them.

The planned conservation project was therefore stalled almost before it had started, but in spite of the protests, all stakeholders still shared a desire to protect the Itombwe forest from external threats.

In order to find a way out of the conflict, Rainforest Foundation Norway supported the organization of a workshop in 2008, bringing together local communities, indigenous peoples, authorities and conservation organizations to discuss a way forward for protecting the Itombwe forest. This workshop resulted in the establishment of a joint working group that developed a common action plan towards the establishment of new borders for the reserve.

Participation to redraw the reserve

One of the most important tools in the action plan was participatory mapping activities, which were used to arrive at a re-delimitation of the reserve. Technicians in geographical information systems (GIS) trained people within forest communities, so that they could map the area to be reserved themselves.

Participatory mapping exercises were the conducted in villages in and around the Itombwe forest. Villagers gathered to discuss where the territorial reserve borders should be set, based on their traditional knowledge, in particular about wildlife, breeding grounds and animal paths. The maps also included local communities’ traditional use of forest, activities such as hunting, gathering and farming sites. The mapping thus resulted in information both on biodiversity and human activities.

The mapping exercises resulted in redrawing the boundaries of the reserve, which were integrated in a new decree, written and approved by all stakeholders. This document was signed by the governor of South Kivu in June 2016.

Towards a participatory management of the reserve

Having the local communities participate in the definition of the nature reserve’s borders was indisputably a breakthrough for conservation in the DRC and an incredible achievement for the local civil society and the forest communities themselves.

The process is now moving toward its most decisive step which will consist in the development of a management plan for the reserve. Each protected area in the DRC has a management plan that lists activities that are promoted or forbidden within the area.

Traditionally those plans are developed by national and international conservation institutions alone and consequently tend to be extremely restrictive for human activities. This lack of consideration for local practices has led to countless conflicts between forest communities and armed eco-guards in charge of enforcing those plans.

The people of Itombwe were included in the re-delimitaion of the reserve. This is a new approach to conservation in the DRC.

Rainforest Foundation Norway and its partner organization Africapacity will support local communities’ effective participation in the development and the implementation of the management plan. If successful, this will be an unprecedented official recognition of the contribution of customary knowledge and practices in the protection of the forest, and could set a standard for participatory forest conservation elsewhere in the region.

– What you do without us, you do against us, concludes Miniota, a pygmy activist from Mwenga.

– The community has demanded full participation in all activities linked to the Reserve. We know that this co-management does not exist yet anywhere else in the country. But we want to inform you that we are ready and we told the joint working group so. We will manage our forest, he says. 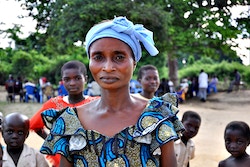