A new investigation links deforestation, forest fires and intimidation of local communities, to supply chains of the multinational soy traders Bunge and Cargill.

Rainforest Foundation Norway’s investigation team visited areas in the Amazon and Cerrado biomes this August, in particular communities living in and around land subject to agricultural expansion.

The team visited some of the municipalities proven to have the highest deforestation for soy in 2019, and where numerous deforestation alerts have been captured by the Rapid Response Monitoring System.

In the vicinity of Bunge and Cargill’s silo facilities, they witnessed illegal forest fires and talked to communities experiencing invasions, violence and death threats by farmers and security personnel of farms thought to supply soy to the multinational traders.

“On the other end of the supply chain are meat and dairy producers with open wallets, silently supporting and accepting the destruction of Brazil’s forests,” she continues.

The RFN investigation team witnessed rampant fires in the states of Tocantins, Maranhão and Bahia, as well as along the trans- Amazonian highway BR 163, known as the “soy road”.

No public agents were seen to extinguish any of the fires, instead the team saw local communities fighting for their livelihood, trying to stop the fires spreading with their own limited means.

Escalating tension between local community members and security guards of farmers in the soy trade was a returning topic among people the investigation team talked to. Violence and death threats were reported as a means of intimidation.

“It is inexcusable that the leaders of the soy industry fail to stop the ongoing environmental crisis and human rights violations driven by the commodity that they trade. What is even worse is that they actively oppose and stand in the way for an industry-wide solution to protect the remaining native vegetation in the deforestation frontier” says Anahita Yousefi at Rainforest Foundation Norway.

Retailers and protein producers with high-risk suppliers such as Cargill and Bunge in their supply chain should:

Investors in Bunge and other high risk soy companies should: 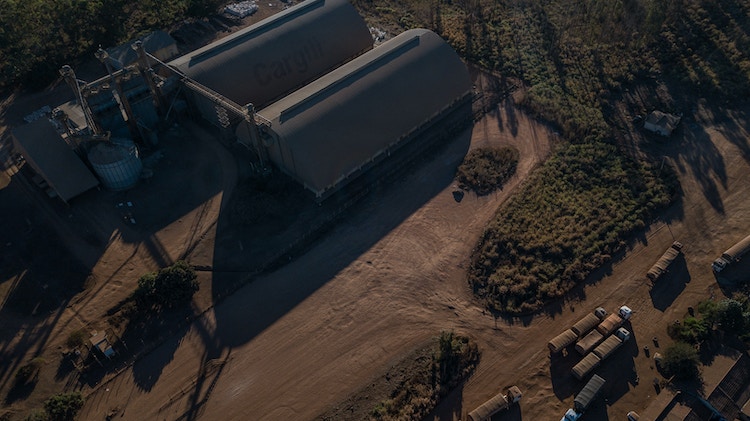 The Cost of Soy

The environmental crisis in Brazil grows while European companies increase their import of commodities fueling the destruction.

Every year, land grabbers set fires to several areas of the Amazon and Cerrado during the dry season, destroying native forests or clearing previously deforested areas as a way to expropriate settlers and clear more areas to sell to agribusiness.

Whilst the environmental crisis in Brazil unravels, European markets continue to buy commodities that are driving deforestation, such as soy. According to figures from the Brazilian Association of Vegetable Oil Industries (ABIOVE), the export of soybeans from Brazil to the EU from January to July reached 7,627,670 tons, an increase of 75 percent in comparison with the same period last year1.

Cargill and Bunge are the largest soy trading companies in Brazil with their respective 15 742 940 and 12 833 567 tonnes of soy exported from Brazil in 2018. Last year, Cargill and Bunge had more fires in the vicinity of their silos than in all other main soy traders combined.

None of the soy giants have transparent sourcing systems, making it difficult to track the origin of the soy traded by Cargill and Bunge. Rainforest Foundation Norway has used our own documentation and local sources that confirmed that Cargill and Bunge have been the main buyers of soy from the areas visited. This, combined with the proximity to the traders’ silo facilities, sourcing data from Trase and deforestation alerts from the Rapid Response Reports gives our investigation strong indication of the role of the traders in the areas the team visited.

The Cerrado biome, the deforestation frontier in Brazil, lacks laws protecting it from deforestation and land conversion. Only 3 percent of the Cerrado is protected through national laws and regulations.

The current Brazilian government has systematically sought to undermine the protection mechanisms for the Amazon. They have tried to change the legislation, demolish environmental and indigenous institutions such as FUNAI, cut budgets for the environmental police IBAMA and dismiss key people in INPE.